I’m a Legion of Superheroes fan. Issue 251 of Superboy and the Legion of Superheroes was my first ever DC Comics purchase. The sheer wealth of characters, their colourful costumes, odd names, and equally strange powers (Matter-Eater Lad? Bouncing Boy?) appealed to my sense of wonder, drama, and fun. I’ve had a soft spot for the Legion ever since. So, when DC announced that Brian Michael Bendis would take on the responsibility of penning the next chapter in the Legion’s labyrinthine adventures, I was excited. And a little concerned. That Bendis would play fast and loose with Legion continuity was certain. But how fast and loose? Would his teenage superheroes simply be 31st-century analogs of today’s ‘kids’, or would Bendis manage to give them more distinctive, unique voices? Speaking of voices, how much dialogue would there be? (I mean, I like a good bit of banter more than most – and certainly more than Jim and Eric – but even I have limits.) Most importantly, would Bendis manage to capture the sense of wonder, fun, and adventure that had so hooked me as a kid? Well…

I guess I’m going to have to wait a while to get those questions answered, because Brian Michael Bendis has essentially swerved the issue by not having the Legion in Legion of Superheroes: Millennium 1 at all. Yes, you read that right. After all the fanfare and all the excitement and DC Comics blatantly lying on their website by proclaiming that everyone’s talking about this series (the corner of the internet I frequent has been curiously muted about this title, for some reason), our favourite comic company has relaunched this much-loved property, which has been absent from its main continuity for many years, with a comic that bears that property’s name, but doesn’t actually feature it. Unbelievable. 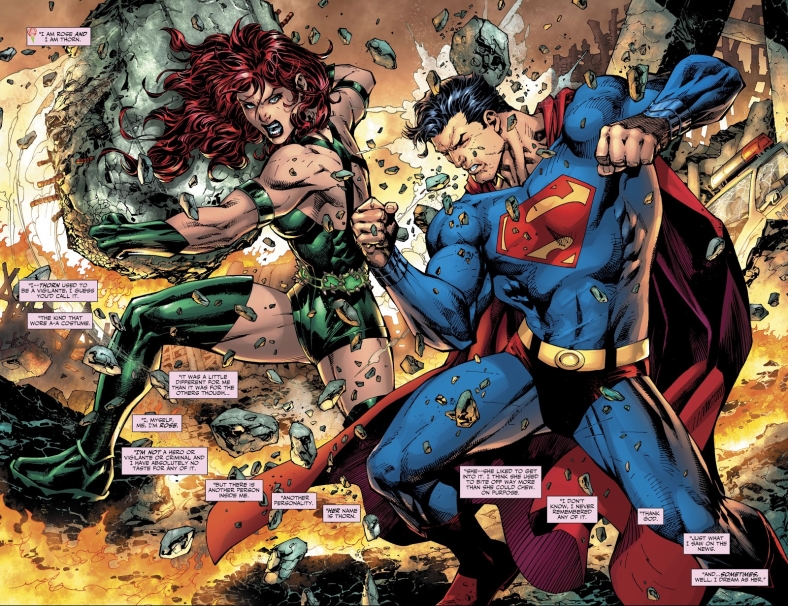 Ooh! A double-page splash! Nice. If you hang around, there’ll be another one along shortly, too.

“But, what does it feature, Daw?” I hear you plaintively cry. I’m glad you asked that question.

Although you may not be.

Older, dignified Supergirl is neither too old nor too dignified to wear something else. I like that. She pulls it off pretty well.

Before I get into the issue proper, I want to make one thing very clear. I do not hate Brian Michael Bendis. There are plenty of comic book fans and friends of my acquaintance who do and that’s fine. He clearly possesses some writing ‘tics’, but I’ve generally found his work to have a lot of heart and his pacing of action sequences (and, sometimes, structuring of individual issues) is generally sublime. To start an important issue like this, however, with a piece of repetitive and self-consciously ‘real’ dialogue as he does here is, I think, unsatisfactory, and indicates the kind of (probably unconscious) reliance on familiar patterns and techniques that suggests Bendis is deeply unsure about what he’s doing here. And, dammit, I hate saying stuff like this, because ultimately I have a great deal of respect for creators and generally deplore the kind of cod-psychoanalysis of the writer that passes for ‘intelligent’ reviewing in some circles. But how else am I supposed to respond to this?

“What I am about to say is going to sound insane. But I know it sounds insane. I want you to know that I know this sounds insane…”

The mysterious speaker is Rose. She of Rose and Thorn. She is our special viewpoint character who will help guide us through DC’s future continuity. I’m not sure about you, but I was rather underwhelmed by the revelation of Rose’s identity, but, to give Bendis his due, I ended up feeling for her by the end of the opening section in which she gives a (much) older Supergirl (more Supergrandma, if I’m being honest) her potted history. Thorn is her alter ego who has issues with controlling her super-powered aggression; Rose, on the other hand, doesn’t have superpowers. Or, does she? Because we find out that Rose is just keeping on going. She shows no signs of aging. The problem she’s got is that the medication that keeps her alter ego under wraps has run out and, because her multiple personality disorder is a condition that is now ‘cured’ at birth, no more has been made. Thorn’s going to make a reappearance and she’s going to be mad.

I quite like this, actually. Nice art and the layout works rather well, too. Although why it’s so easy to take down Terry I’m not really sure. Something to do with the plot, I’m guessing.

This opening section is actually very good. Rose’s vulnerability, humility and clear terror at the prospect of her alter ego getting loose make her a profoundly sympathetic character. That Supergirl treats her so warmly only adds to that effect. Jim Lee and Scott Williams’ art is genuinely excellent. The flashback action double pages are as bold and exciting as you might expect, but it’s in the nuances of facial expression – for both Rose and the older Kara – that the warmth of Bendis’ characterization is really maximized. It really is very affecting work.

It’s a shame, then, that Bendis squanders that sense of emotional engagement by plunging us into Rose’s (and Thorn’s) history, as he takes us on a whistle-stop tour of DC’s futuristic properties. There are three of these sections – Batman Beyond, Kamandi, and Tommy Tomorrow – and each one is a vignette featuring Thorn or Rose. In the Batman Beyond section, a clearly traumatized Thorn is killing bad guys in Neo-Gotham before attracting the attention of Terry (Batman Beyond) McGinnis, whom she fights and overpowers. And then apparently attempts to bore to death with some self-pity-tinged philosophizing about the relationship between costumed heroes and the chaos they create. And then she walks away, because of course she does, because there’s nothing else she can do at this point. She’s not going to kill Terry, is she? Terry attempts to reason with her, but she’s not going to listen to him and say, “Yeah. You know what? Heroes do actually do more good than harm, don’t they?” Because that’s not how violent self-absorbed superbeings roll.

TCHNK! I don’t want to talk about this, so I’m not talking about it. TCHNK!

Actually, do you know what? Let’s not. Andrea Sorrentino’s art is lovely and moody, but I’m not entirely sure what happened in this section, nor am I certain of its significance. All I will say is that I now really do dislike Thorn and, as a result, don’t really care that much about Rose or this book. Well played, Brian. Well played.

The final section is the weakest of the four. I’ve been reading DC Comics most of my life and I had no idea who Tommy Tomorrow or the Planeteers were. The Lord above help you if you’ve only just picked this issue up. Because the writer certainly won’t. As with the other sections, there is no plot to speak of – just a little vignette that is meant to be amusing but isn’t because you don’t really know what’s going on or why it matters. Without context, without knowing exactly what the Planeteers are that Rose wants to join or when this is relative to the other sections or why Rose wants to do what she’s doing, this is essentially just an extended cameo in a wider story that presumably exists in Bendis’ head but hasn’t made it to the page yet.

And I have hated having to write this review. There’s a mystery to Rose and to why she still exists in these future DC timelines that is potentially very interesting and, dammit, I like Rose. I’m rooting for her. The problems with overly verbose dialogue aside, that opening section works. But the sections that follow… Look, we were told that this series would tie all the different DC futures together (there’s an argument for keeping them very loose and separate from one another, actually, but let’s not go there right now) but if the only string you’re going to use is Rose and Thorn then you should probably take a trip to the haberdasher’s and stock the hell up. This is desperately disjointed, deeply unsatisfying stuff. The lack of specific dates for each section (surely a prerequisite for a story with the express aim of uniting DC’s future histories) is poor judgment; the absence of the Legion of Superheroes in the title that bears its name is unforgivable.

An intriguing and warm opening section soon gives way to a disjointed and, at times, alienating trip through DC’s future continuity. There’s some great art and one or two funny moments, but, given the hype that accompanied this title’s announcement, that’s simply not enough.